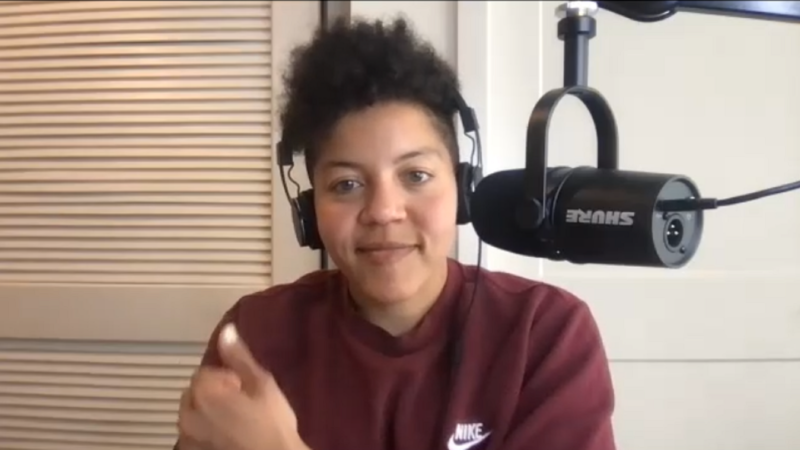 Jane Coaston is the new host of The Argument, a massively popular New York Times podcast that seeks to host civil and informed discussions about the most pressing issues of the day. A 33-year-old Cincinnati native, Coaston has worked at Vox, MTV, and the Human Rights Campaign, among other places. She's the daughter of a black father and a white mother, was raised as a devout Catholic, and identifies as queer.*

Coaston tells Nick Gillespie that growing up in a liberal household in a conservative part of the country made her concerned about giving authorities a lot of power. Adding to that was a sense of being isolated because of her race and sexuality. "My libertarian sensibilities really came from a sense of, I know what it is like politically to always lose and to see what the winners look like," she says.

One of Coaston's goals for The Argument is to bring in a lot of new voices to debates about politics, partly to learn new arguments but also to model true pluralism. She says she is sick of performative politics in which people act out predetermined roles rather than actually engage with one another and she's wary of the idea that everything needs to be adjudicated at the national level. She also says that we the people—not the feds, or Donald Trump, or Joe Biden—are the ones politicizing every aspect of our lives. That's an individual decision, she insists, and people can make that decision or not.

2d ago2d ago
Subscribe
Unsubscribe
Haftalık
Every Monday, the libertarian editors of the magazine of “Free Minds and Free Markets”—Matt Welch, Nick Gillespie, Katherine Mangu-Ward, and Peter Suderman—discuss and debate the week’s biggest stories and what fresh hell awaits us all.
T
The More Perfect Union

3d ago3d ago
Subscribe
Unsubscribe
Haftalık+
A business and current events podcast for anyone looking to gain more freedom and autonomy through entrepreneurship. Art, culture, politics, technology and more. This show gives you the insights you won't find anywhere else. If you want to know what's going to happen tomorrow, listen to this show today.
T
The Wilderness

6M ago25w ago
Subscribe
Unsubscribe
Aylık
What will it take to defeat Donald Trump in November? In season 2 of The Wilderness, Jon Favreau looks for the path to victory in 2020 by talking to voters, strategists, organizers, and candidates in the battleground states that will decide the election.
P
Payne's Politics

5d ago5d ago
Subscribe
Unsubscribe
Haftalık
Sebastian Payne takes you into the corridors of power to unwrap, analyse and debate British politics with a regular lineup of expert Financial Times correspondents and informed commentators. New episodes available every Saturday morning. See acast.com/privacy for privacy and opt-out information.
C
Can He Do That?

6d ago6d ago
Subscribe
Unsubscribe
Haftalık
“Can He Do That?” is The Washington Post’s politics podcast, exploring presidential power in the face of weakened institutions, a divided electorate and changing political norms. Led by host Allison Michaels, each episode asks a new question about this extraordinary moment in American history and answers with insight into how our government works, how to understand ongoing events, and the implications when so much about the current state of American life and the country’s politics is unlike ...
N
None Of The Above

14d ago1w ago
Subscribe
Unsubscribe
Aylık+
As the United States confronts an ever-changing set of international challenges, our foreign policy leaders continue to offer the same old answers. But what are the alternatives? In None Of The Above, the Eurasia Group Foundation’s Mark Hannah asks leading global thinkers for new answers and new ideas to guide an America increasingly adrift in the world. www.noneoftheabovepodcast.org
F
Face the Nation on the Radio

3d ago3d ago
Subscribe
Unsubscribe
Haftalık
Margaret Brennan asks the biggest guests the smartest questions. Hear official Washington on the firing line, on your schedule.
P
Pod Save the People

2d ago2d ago
Subscribe
Unsubscribe
Haftalık
Organizer and activist DeRay Mckesson explores news, culture, social justice, and politics with analysis from Kaya Henderson, De’Ara Balenger, and others. Then he sits down for deep conversations with experts, influencers, and diverse local and national leaders. New episodes every Tuesday.
T
The Skepticrat